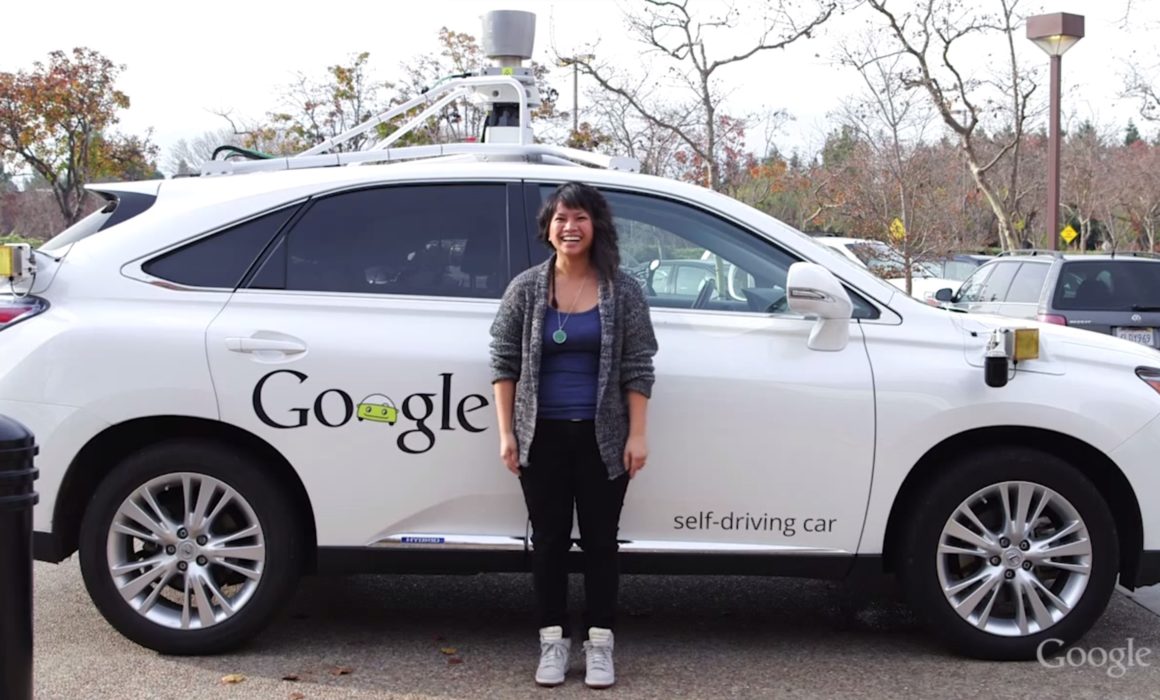 After 7 years, today is my last day at Google / X. Honestly, I never thought I’d stay for that long. And the funny thing is, I almost didn’t accept the job. But here I am 7 years later, and ready to take the leap and go full time #Entrepinay (aka Pinay entrepreneur). Reflecting back, there wasn’t one moment that brought me to this decision. Instead it was a perfectly timed chain of events, a lot of faith, and listening to signs from the universe that led me to this current endeavor.

Throughout my time working at Google & X, I always felt inspired and challenged but also knew there was something missing. It wasn’t my true passion, but I sought out any opportunity possible that was relevant (events, education, marketing) to justify keeping the good paying job with great benefits and health insurance. At the same time, gentrification was rearing its ugly head in the city that I love. People were getting evicted, housing prices were insane, and a huge population of noticeable douchebags started popping up in my favorite bars. People were attacking the tech buses and protesting against big tech, and I felt like I was on the wrong side of the fight. Every time I stood in line at the Google shuttle stop, I felt the burning eyes of every person in every car that drove past, imagining what they were thinking about me. “Don’t worry,” I would respond to them in my head. “I also run my own nonprofit and am FROM the city. I am not one of these people, I swear…”

Every day was a struggle feeling massive identity crisis. When I met new people and they asked me “What do you do for work?” I’d answer but add a qualifier at the end — “I work for Google right now, but I really run a nonprofit dance company on the side which is my real passion.”

When people refer to the “tech bubble” it’s fictitious at best. But seriously (not literally), the bubble is real. Having worked in the nonprofit sector for a few years before coming to Google, I had a different perspective right off the bat from many of my younger new grad co-workers. On a regular basis I’d hear Googlers complaining about food at the cafeteria (at least we get free food), the lack of snack variety in the micro kitchen (what’s a micro kitchen?), and always demanding more company swag (don’t get me started).

To clear some of my tech guilt and satisfy my need for meaningful work, I did a 20% project with Google for Nonprofits and hosted tons of student visits to campus (getting grants for my teacher friends’ schools & nonprofits because I wanted to give back like Robin Hood). I used this as justification as to why I wasn’t a complete sellout when I had heated debates with my activist brother who warned me I was working for “the man.” 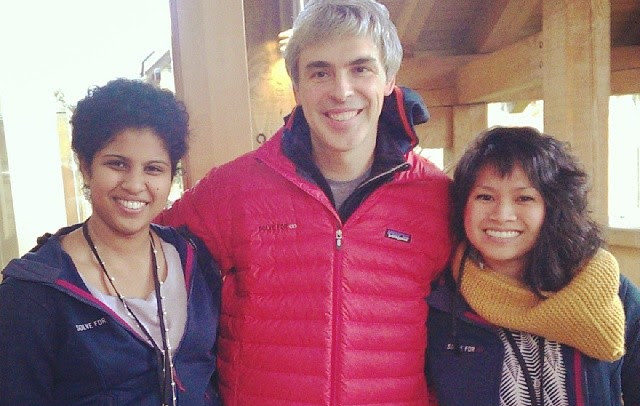 Me and co-worker Karishma with CEO Larry Page at an X conference. Super kind and down to earth guy.

Feeling Alone in a Giant Company

Even though I worked at probably one of the coolest tech companies out there, with a mission that matters, some of the smartest people in the world, and one of the kindest CEOs, it was still big tech. And with big tech comes a certain privilege and that pesky tech bubble that does in fact shield it’s employees from many (not all) real world problems happening to real world people.

I remember the day that Philando Castile was shot. I came into work after having watched the video and felt sick to my stomach, wanting to burst out in tears. And I walked into the building feeling like no one else was feeling this same pain as me, except my few co-workers of color. After the last election, I remember talking to a few co-workers (white women) who were almost in tears due to feeling scared about Trump being in office and the fate of our country. While I understood the legitimate concern they were feeling, I also felt a pit in my stomach thinking to myself, “Really? You’re only scared now? Black and brown people in this country have been scared…” And it wasn’t as if my co-workers didn’t care — they did. It was more so that the issues I struggled with on a day to day basis felt disconnected from the every day life we were living in that cushy tech bubble. And it reached a point where I wasn’t ok with that, especially when people were dying in the street.

“If I died tomorrow, would I feel proud of my life?”

Throughout this identity crisis and to this day, this question is my North Star in figuring out which path to take. My family talks very openly about death, mainly because we’ve experienced tragedy. Shortly after I converted to a full time employee at Google, my cousin Jonathan died by suicide. It was unexpected, extremely traumatic, and a devastating loss for my entire family. His death reminded me of the fragility of life, and the fact that tomorrow is not a guarantee.

So I’d ask myself this question to gauge my life path, and at the time the answer was sadly ‘no.’ I didn’t want to die with the legacy of being Gina Rosales, the woman who worked at a big tech company, rode 4 hours on a shuttle every day, and had stopped dancing. I promised myself that as long as I was STILL ALIVE (shout out Alvin), I would dedicate every day to being my best self and helping others. I needed to make the answer to this question a ‘yes’. Jon wasn’t able to live his full life, so I was determined to live mine with no regrets.

My cousins and I at Jon’s funeral

I searched deep in my soul for what truly made me happy. I knew that I felt the most alive, energized, creative, and empowered when I was doing events, and I wanted to feel that way every day at work. I had many doubts — when I thought about people who started their own companies and raised money I thought of rich white men. I didn’t see people like me doing things like this. But I did have one mentor, a bad ass fellow Entrepinay named Irene. I said to her “Who am I to run my own business? Just some little Filipino girl,” to which Irene replied “Screw that. Who are you NOT to?” She was right. I ended up launching Make it Mariko on my 30th birthday as a present to myself and went part-time at X so I could run it. 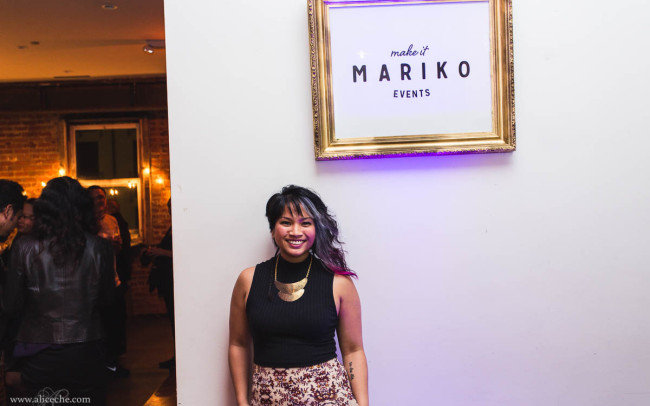 The past two years of running Make it Mariko have been a combination of making shit happen, calculated risks, “fake it til you make it”, and doing things that scared me. Over the past year specifically I’ve dedicated a large portion of my events life to creating and launching a monthly event called UNDISCOVERED SF: A Creative Night Market in SOMA Pilipinas, the new filipino cultural district in San Francisco. This event has reconnected me to my roots and to my San Francisco community in such an impactful way that I am so grateful for.

Through Make it Mariko, UNDISCOVERED, all my clients, and vendor partners (shout out Endeavors Collective), I’ve found myself again. The me that I can be proud of. The whole me that doesn’t need a qualifier at the end of sentences asking what I do for a living. The me that is trying to walk the walk, and not just be an online activist. The me that, if I were to die tomorrow, would be damn proud to say “I’m an ENTREPINAY.”

So goodbye big tech. Thank you for the beautiful 7-year adventure and the one-of-a-kind experiences. I wouldn’t take back a day of my time with you. But I’ll see you around, this time as a client 😉 I know that Jon would be proud.